Review of shopping at e-mart

It’s a simple thing, but I miss grocery stores. In the states if I’m missing something while cooking I just hop in the car and run around the corner to the store to get it real quick. They don’t really have grocery stores here. It’s more like small markets and 7-11 like mini marts. That all carry relatively the same things, because that’s what’s available in the local area.

So, a little while ago I decided I was going to go see what this e-mart has to offer. It’s not convenient, but I’d heard good things about it and it’s probably the closest thing to a one stop place for all your shopping needs Korea has to offer. They were supposed to have just about anything you were looking for. Groceries, clothes, house supplies, cooking supplies, etc. 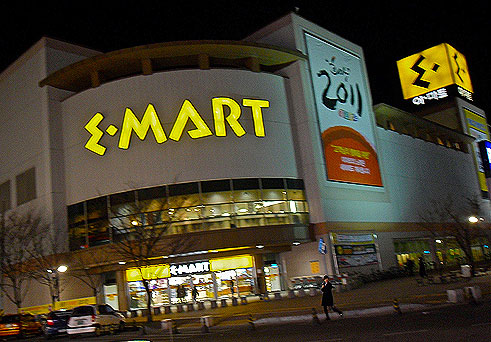 The nearest one to me was up near the Osan station 8 Km away, 3 stops up the line toward Seoul. Like I said, not exactly convenient. But I didn’t have anything else planned, so I made my way down there. It wasn’t hard.  Subway fare was 1,650 won, then hopped in a taxi the remainder of the way 2,300 won.

Pathfinder and the Seoul Metro Traffic Center are helpful sites for mapping out the best routes using public transit. Both are also in English.

If you want a shopping cart you must rent it by putting a 100 won coin in the slot on the handle and sliding it closed to release the lock (You get it back when you return the cart and lock it up again).

I was impressed with the first floor, which was all food and groceries. They had a few american and international brands, but still mostly Korean brands. The meat wasn’t any deal since that is one thing the Commissary does well, so I skipped that. I did get seafood and produce and other such things. The quality was much better than I’ve seen from on base or in the local markets. A 2 pack of the small local blue crabs for 4,538 won. 2 different cuts of really fresh looking salmon for 4,708 won each. A 3 pack of fresh squid for calamari for 3,000 won. I was drooling all through the seafood area. They had anything you might want, and some you might not. Big lobsters, and king crab in tanks. Mussels, clams, prawns, whole and filet fish, sea snails, tanks of abalone…overall it seemed a reasonable price. I’m going to have to make Chioppino one day…One thing I should mention though is that they don’t have much labeled in English. You pretty much have to know by the look of the fish what it is. It’s a little easier with the packaged goods because they usually have a picture and a maybe even the name in English.

I also got an 8 pack of large ripe apple persimmons for 3500 won. Lettice, onions, mushrooms, snacks, tea…Surprisingly the tea was the most expensive food item I bought. But I knew that they were very good and local.

One is called Honey Citron Tea. Koreans call it Yujacha. Yuja (유자) fruit is thinly sliced with its peel and combined with honey or sugar. To prepare the tea you take a big dollop of the thick, yellow syrupy mix, very similar to a marmalade, and stir it into a cup of (usually) hot water. The peels usually fall to the bottom of the cup and you can eat them or not. Koreans typically drink it as a herbal remedy to fight of winter colds, coughs, headaches and chills because it contains a lot of vitamin C, which is effective in preventing colds and fatigue recovery and helps sooth the inflammation in throats and coughs. I’ve also seen it in a few recipes. Might have to try it on top of baked salmon.

Believed to be the hybrid of the sour mandarin and the Ichang lemon, the yuzu is a golf ball-sized citrus fruit. It originated from China, but today is most widely cultivated in Korea and Japan, and was first smuggled into California in 1888 by homesick Japanese-Americans. It has been described as tasting of limes, lemons, and grapefruit—all at once. It’s the scent that hits you first. An unmistakable, inimitable, floral-fruity spiciness rushes up your nose that is at once soothing and washes you with the promise of warmth to come. Delicious. 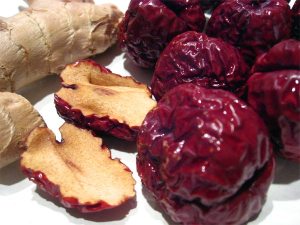 The other tea I got reminded me of that warm cup of ginger tea I had down at Baegyangsa temple. I think it’s called Daechucha. It’s a packet of powdered ginger, pine nuts, dried jujube (which are called daechu in Korean), and almond. It’s way strong if you use the whole packet, so I end up splitting it in half and adding some sugar to sweeten it up. I’ve been enjoying the spicy tea the last few days since I’ve been congested. The steamy aroma helps clear my sinuses and the warm spicy taste warms me all the way through and further helps to clear me up. Daechucha is known to be abundant in iron, potassium, vitamins B and C. Normally I don’t like things floating in my tea, but these are exceptions.

I was quite pleased with my finds, that is until I went to check out. What I didn’t know about shopping at e-mart and around at these main stream places was how ridiculously high taxes are. My total for all the groceries was only 43,760 won, and I had a decently full cart. Taxes were an additional 27,182 won, plus 2,718 won which I think is un-taxable goods bought.  All told I ended up paying 73,660 won. Additionally if you don’t bring your own bags they charge you an additional fee. Luckily I had read that when planning the trip and had my own. While I liked the variety and abundance, between the transportation and taxes I don’t think it’s worth shopping at e-mart.

I did look around and shop the rest of the store as well, looking for christmas gifts. I didn’t buy much from those goods. It was still pretty expensive, where I had heard that it was cheaper than on the strip. Leggings for 15,000 won, gloves for 28,000 won, jackets for 200,000 won. I found a few deals on some cookware I needed, a new cutting board, a basting brush, etc. All stuff that is affordable anyway. They didn’t have much in the way of Christmas gifts. Mainly lots of clothes, a beauty and perfume section, and a decent entertainment section. Not much in the way of hair dye though, I was hoping to change mine up a bit. I had gone up there shopping before checking out with my groceries, because that’s how it’s done in the States, you pay all together. That’s not the case here. You pay separate. Food items you check out at the registers on the first floor, all the upper level goods you check out on the third floor. Again, kind of inconvenient. Ah well.

Also, I had trouble finding anyone that spoke english. The staff was friendly, though we did have a minor confrontation as I was getting into the taxi. Two staff, I assume security personnel as they were talking on walkie talkies, ran up flagging me down before I could leave and pulled out all my bags. I was very confused. I guess they thought I had stolen a camera, or had caught me on camera, or something incriminating. I have no idea. Anyway, I handed over my receipts and kept replying “no camera” when they asked, still looking very confused. After going through my bags they were satisfied, apologized, and returned the bags to the taxi so I could make my way to the station and on home.

Overall I would say it’s not worth all the effort and taxes to shop at e-mart regularly. I would only go back for specific things. They prepared good dinner rolls at the bakery there for the family we had Thanksgiving with. And their seafood was abundant and reasonable.

Subway line 1, exit Osan station. Taxi line is just across the street and to the left of exit #1.


View Living Around Osan AB / Songtan in a larger map

13 Dec This entry was published on December 13, 2012 at 11:40 am. It’s filed under Food, Shopping, Songtan, Tea, Travel and tagged food, Osan AB, review, shop, shopping, Songtan, tea, Travel. Bookmark the permalink. Follow any comments here with the RSS feed for this post.

One thought on “Review of shopping at e-mart”